Ukrainian Charity Organisation “Turbota pro Litnih v Ukraini” (Age Concern Ukraine) is a not-for-profit non-governmental voluntary organisation build up on the principles of mutual- and self-help for elder people. Nowadays the Organisation has 10  branches and groups throughout Ukraine and unites about 2 thousand volunteers. Our organisation receives not a single hrivna from the budget. 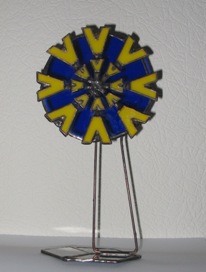 25 years ago European network « Volontereurope » was registered as a charity in the Netherlands. Nowdays it unites nearly 1500 NGO’s all around Europe.

In recognition of its anniversary   « Volontereurope »  acknowledged five remarkable “Active Citizens
of  Europe” individuals as well as organizations which have proved to be outstanding pioneers for active citizenships  by  improving life in  their community either locally,  regionally or internationally.Through the awards,«Volontereurope »   wanted to show that      volunteers are powerful actors in the European civil society.
Our organization  “Turbota pro Litnih v Ukraini” has received this award.
We consider receiving such award not only a big  honour but also confirmation that the volunteering movement is  both   an  inexhaustible source in developing civil society in Europe and it has a big future in Ukraine.

Since 2008, “Turbota pro Litnih v Ukraini” is a partner of the Foundation “Remembrance, Responsibility, Future” and coordinates the “Meeting Point: Dialogue” in Ukraine.

The main objective of the program – the moral and practical support to people affected by Nazism, the advancement of these people in the countries of the projects (Belarus, Ukraine and Russia).

During the five years of the Program in Ukraine were supported 104 projects totaling 1,825,000 euros.